Were the mass protests-turned-revolt in Egypt inspired by mobile, social media? Variations of this question have generated innumerable blogs, tweets, status updates, emails, and stories in the print, televisual, and networked media over the past month. I posted on this question myself in a recent entry, in which I concluded, after suggesting some of the many ways that social media operated within the Egyptian revolt, that it was time to begin asking some different questions.

Having on Wednesday taught Walter Benjamin’s famous essay on mechanical reproduction and spending Saturday in Madison, Wisconsin, protesting the attempt by newly elected Republican Governor Scott Walker to strip public employees of almost all of their rights to bargain collectively, I have some new questions to ask about the relations among social media and collective political action. For now, I’ll stick to one: are events like the protests in the Middle East and the Midwest 21st century versions of the “test performances” Benjamin describes occurring in film.

The key issue in answering the question might concern audience. The protest in Wisconsin was performed less for the audience at the Capitol in Madison than for the local, national, and global news media. The protests have generated hundreds of thousands of emails, photos, sound clips, videos, tweets, FB updates, blogs, and news items for the print, televisual, and global news media. Over the past week Madison has been a dense and complex node at the intersection of many different networks—television, newspaper, government, education, labor, media, and so forth. As thousands of protesters follow transportation networks (car, bus, bike, or foot) to the capital, they bring with them a variety of other networks, geolocated via phones, GPS, or other mobile devices, as well as connected by cameras, audiovisual recorders, or credit cards, each of which has the power to activate other networks.

Two events I witnessed/participated in can help elucidate the way in which the protests work as test performances. The first occurred last Saturday, where Nathaniel Stern and I watched a small group of Tea Partiers try to provoke a union leader and union supporters for the sole purpose of capturing it on video. 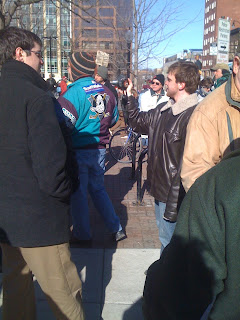 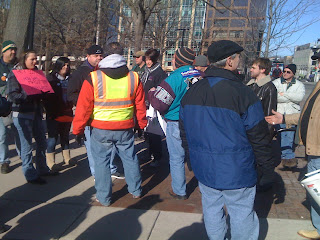 The young man in the brown leather jacket with a video camera was with the Tea Party provocateur in the blue and purple hockey jacket and ski cap. They were trying to rile up protesters then film them up close with shaky video to give the impression that the protesters were angry and violent. Initially the provocateur tried to provoke a union leader, who showed admirable restraint in trying to explain the process of collective bargaining before turning away. Meanwhile some union supporters had begun a chant; the man with the video camera went up in their faces, shaking the camera to give the impression that the scene was riotous and potentially violent. This is an increasingly familiar media tactic used on the right, performed solely as a test for the media. The audiovisual event that was produced from this event bears little relation to the actual historical events as they happened on the grounds of the Capitol—nor was it meant to.

A second, more benign version of this occurred on Tuesday at the Capitol, when Lane Hall and I were asked to participate in a press conference being staged by union organizers. The organizers had rounded up demonstrators to stand behind the three union members who spoke and answered questions. This test performance, too, was oriented not towards the small audience in the Capitol’s NW hearing room but to a local, regional, and national television audience. Indeed on the 5:00 local news on TJM4, the “supporters” were plainly visible behind the 3 union spokespeople (though I was off to the side, out of camera range).

Both of these performances, one from the right and one from the left, were not aimed at the audiences on the spot, at a particular historical moment, but were directed at the local, national, and global print, televisual, and networked media. In the ongoing protests, whatever pressure the protests put on Wisconsin’s Republican leadership comes much less from the results of the action of protesting at the Capitol itself than from its amplification, multiplication, and distribution across millions of screens—from HD television and computer monitors, to mobile devicess, and so forth. For the battle to be won on the grounds of the capital it will have to be won as well on the screens of the world.
Posted by Richard Grusin at 8:34 AM No comments:

Was Egypt an Internet Revolution?

January 2011 will go down in media history as a momentous month. The month began with the continuation of extensive coverage of the Wikileaks Cablegate controversy in print, televisual, and networked media. Media attention to Wikileaks was eclipsed in large part by the mass shooting in Arizona on January 8, echoes of which had already begun to fade by the time that mass protests forced Tunisian president Zine El Abidine Ben Ali to step down on January 15. But the most geopolitically significant event of the month was the popular revolution in Egypt, which started on January 25 and which finally culminated on February 11 with the resignation of President Hosni Mubarak.

Was this an internet revolution?

Two weeks ago I blogged about the way in which live coverage of the Egyptian protests participated in widespread premediation of the future of Egypt. That premediation continued on February 10 as the world awaited Mubarak's supposed resignation speech; it continued up until Mubarak finally resigned on February 11. Both before and now after his resignation, cable news networks and the political blogosphere have been filled with premediations of what will follow Mubarak's departure. And you can rest assured that such premediations will not end any time soon. In the 21st century print, televisual, and networked news media are oriented largely to anticipating the future, even while covering news live as it happens.

One proiminent theme running through the premediation of Egypt's and the region's future involved the role of the internet in mobilizing political revolution. The uprisings in Egypt have produced the latest chapter in a familiar debate about the political efficacy of social media: were these mass protests caused by mobile social media like Facebook, YouTube, and Twitter, or were they the genuine, authentic expression of the will to democracy of the Egyptian people? Cable news networks are obsessed with the connections to Twitter and Facebook, focusing on Google marketing executive Wael Ghonim, who first set up a crucial Facebook page and was arrested and interrogated by Egyptian security forces before being released on February 7. Malcolm Gladwell has weighed in with his typically superficial dismissal of the role of social media in political revolution, and Frank Rich has echoed him in his February 6 NYT column.

As the Egyptian revolution continues to intensify, the debate over whether it is a Twitter or Facebook revolution or whether it is a popular revolution caused by mass popular unrest looks in many senses increasingly simple-minded. On the eve of and in the aftermath of Mubarak's departure it seems impossible to deny that the revolution was intensified, amplified, and mobilized by all sorts of media--not just social media but also by global networked print and televisual news media. The pressure put by mass and participatory media on politicians in US and Egypt undoubtedly has helped to accelerate Mubarak's departure. But this pressure was inseparable from, and given its own urgency and intensification by, the proliferation of audiovisual mediations of mass protests in Cairo and Alexandria, as well as elsewhere in the West and in the Middle East.

It is time to move beyond the tired liberal antinomy between the human and the technical, between social and medial agency. As I have argued in response to the similar debate surrounding the mass shootings in Arizona, agency is never singular but is always the product of hybrid networks of human, social, technical, medial, and other actants. What makes social media efficacious is precisely that they are such hybrid networks, complex alliances of human will and desire, technical networks, media formats, embodied individual and collective affectivity, and so forth.

While I have no patience with utopian technologically determinist claims that social movements like those currently under way in the Middle East are caused by Facebook or Twitter or YouTube or mobile phones or cable news networks like Al Jazeera, I have even less patience for the stubborn resistance of Gladwell, Rich, and others to the idea that these social media networks have little or no effect on the ongoing events in the Middle East. We do not have to deny the amplifying, intensifying, and co-creative effects of social media in order to recognize the mass popular movements in the Middle East as the expression of revolutionary fervor or agency.

Sadly, continuing to deny these effects begins to look increasingly like the denial by Fox News and others on the right that the media climate of anti-government violence in the run-up to the 2010 election had no impact on Jared Lee Loughner's mass assassination efforts in Arizona. When Frank Rich, Malcolm Gladwell, and other vocal deniers of the agency of social media in the Egyptian revolution end up maintaining the same simple-minded account of human agency expressed by Sarah Palin in regard to the mass shootings in Arizona, it's a sure sign that they need to embrace a more complex understanding of human, technical, and medial agency.

So was Egypt an internet revolution? We need to begin asking a different question.
Posted by Richard Grusin at 9:05 AM 2 comments: