Last evening I received the following email from MoveOn.org (you probably did, too): 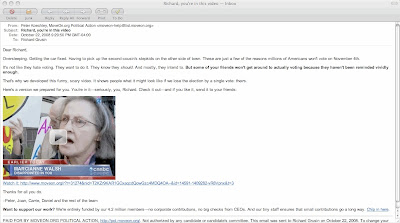 When I clicked on the link in the email, my web browser (like your's, but with a difference) opened to the following screen: 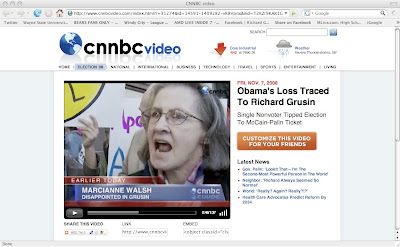 When I clicked on the video, here's what I saw and heard, which was similar to what you saw and heard:
MoveOn's decision to premediate an Obama defeat as a means of getting out the vote is simultaneously brilliant and risky. While it is clearly meant to be ironic, insulting voters to get them to the polls could be a dangerous move. But it is brilliant premediation, remediating the format of any number of political blogs to premediate a future that presumably no MoveOn supporter would ever want to experience. There are a number of deft touches, including a Dow under 8000 and an array of other stories below the window pictured above that premediate the consequences of an Obama defeat in a mixture of semi-serious and tongue-in-cheek stories: 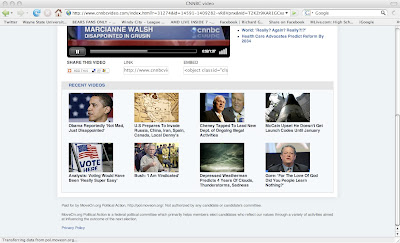 Whether this works as a get-out-the-vote strategy will probably be impossible to determine. But what is undeniable is that it is a brilliant example of premediation, another example of the predominance of premediation as the post-9/11 media regime. But where the Bush administration worked with the print, televisual, and networked media in 2002 and 2003 to manipulate the public to support the Iraq War, MoveOn is employing premediation in an attempt to mobilize voters to act to put the opposition party in power, not by premediating an Obama victory, but an Obama defeat. Let's hope it works.
Posted by Richard Grusin at 2:40 PM